The broad stock market has fallen substantially in recent days and it dragged REITs along with it.  In the process, certain individual stocks seem to have been sold off more as demand for shares dried up.  Within 2CHYP, CatchMark Timber and Core Civic have been hit particularly hard.

CatchMark’s fall is likely related to the general drop in timber prices that has brought down all of the timber REITs.  However, timber is very heavy and very cheap at ~$24 per ton.  This high weight to price ratio makes it a regional business.  It is not economically feasible to truck logs across the country as the transportation costs would eat up the entire value of the timber.  CatchMark primarily sells in the SouthEast region which has not been affected by the timber slump.  In fact, TimberMart South just came out with the 3rd quarter stumpage prices and they are up YoY.  In 3Q18 Pine sawtimber sold for $23.81 per ton compared to $23.66 a year ago.  Mixed hardwood sawtimber sold for $31.13 in 3Q18 compared to $30.38 a year ago.  Historically, CTT has had price realizations above the southwide averages.  The slowdown in homebuilding may reduce timber demand in the future, but the situation is not nearly as bad as the price drop makes it look.

Core Civic is likely down on fears of a blue sweep at the November midterms.  This is not a forum for politics and I will express no opinion as to my preferences, but it is important to understand the financial implications for the REITs we own.  The republican party is general friendlier to the private prison industry whereas the democratic party tends to lean toward use of public prisons.  We all remember the roughly 50% crash in CXW when the DoJ put out a memo to phase out the use of private prisons and I think fears of a repeat incident may be on the market’s mind in the recent selloff of CXW.

The US Marshalls, BoP and ICE are Federal, so a few house seats changing hands will be unlikely to upset these contracts with CXW.  There may be potential for some disruption of CXW’s state level contracts, but at the same time there may be potential for new state level contracts if state officials who were previously opposed to the private prison industry are replaced by a more amenable group.  It is also worth pointing out that there is some crossover on this issue.  There are some democrats who will work with the private prison industry and some republicans who will not.  At this point, very little is certain and it is this uncertainty that is weighing on the stock.  It seems highly unlikely that the actual outcome will be as bad as what is being priced in.

3rd quarter earnings reports are right around the corner and these should bring fundamentals back into focus.  At this point, most indicators show that REIT fundamentals are still strong, so earnings season could pull REITs out of their recent slump.  With earnings season in mind, we have made a change to the profile sheets.  Rather than putting them out with the portfolio analytics, we will be updating them as earnings roll in.  This will allow them to have fresher numbers and will hopefully be a good means of keeping everyone appraised of our take on earnings season. 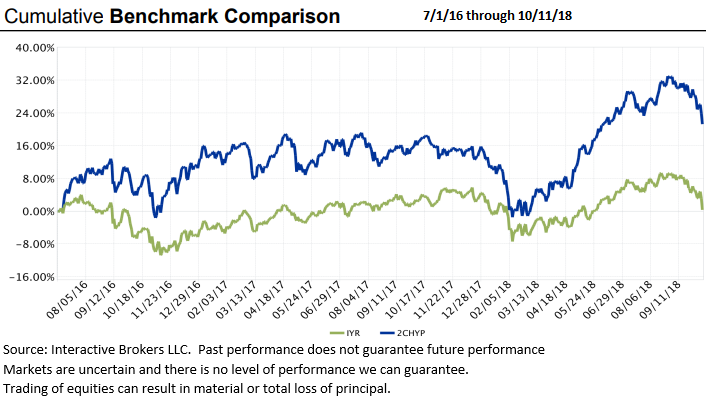