A particularly strong jobs report sent REITs tumbling today on the basis of the report increasing the potential for Fed Rate hikes.  This isn’t the first time REITs have fallen on positive economic news.  In fact, I think it has happened over a dozen times since the taper tantrum of May 21st, 2013.  Each time it represents a buying opportunity for 2 simple reasons.

Essentially, these mini-tantrums give us improved fundamentals at a cheaper price.

The notion that rising rates are bad for REITs is already wrong, but when this is conflated with an improving economy being bad for REITs it borders on absurdity.  While I fear I am stating the obvious here, the market movement suggests that it is not obvious, so I will go through the thought exercise anyway.

REITs are operating businesses and a majority of US REIT properties are located in the US.  When the US economy is stronger, as indicated by this morning’s jobs report, demand for these properties goes up.  When demand for property goes up, 2 things happen:

Both of these things mean more cashflow for REITs.  The counterargument here is that rising rates will increase the cost of debt on REIT balance sheets.  This is true, but I feel inclined to mention that it will also increase the cost of debt for non-REITs.  Thus, suggesting a strong economy hurts REITs would be synonymous to saying it hurts the S&P.  Hundreds of years of stock market history tell us the opposite is true.

Further, REITs have seen rising rates coming for a long time.  They are prepared for it.  They have locked in long term fixed rate debt which will not get more expensive as rates rise.  We have facts demonstrating this concept using data aggregated from 2Q18 balance sheets of each REIT (provided by SNL Financial).

To me it is quite clear that the benefits of higher rents and occupancy outweigh the increased costs.  A strong economy benefits a majority of REIT properties, while rising rates will only increase the carrying cost of a small portion of REIT debt.

While I believe the strong jobs report is clearly good for REITs fundamentally and increases their intrinsic value, that does not mean short term market prices will reflect this benefit.  If the Fed hikes in BOTH September and December or rather indicates at the September meeting that a December hike is also likely, I think REIT market prices will probably fall.  I have no idea how much, but 5% would not surprise me.

This is a risk that I am keeping an eye on, but it does not scare me.  The key is to have a long term investment horizon such that tantrum style market movements do not present a real risk.  Market price dips only hurt if one sells into them.

The differential between market prices of our REITs and fundamental value looks excellent right now and we are net buyers in this environment. 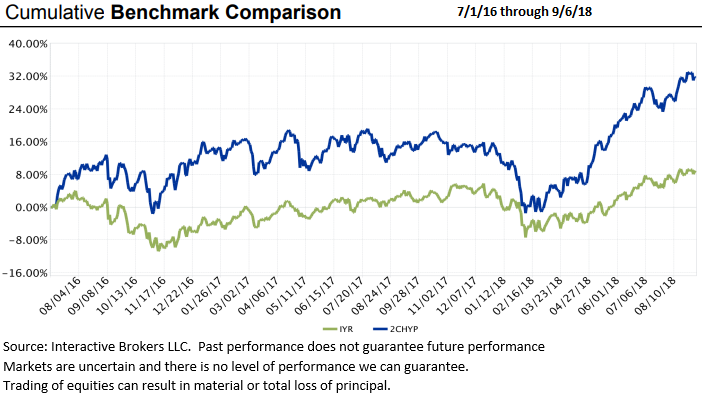